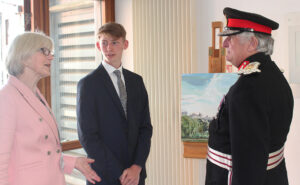 Wye School was honoured  by a visit from the Lord- Lieutenant of Kent,  who officially opened the new Margaret Williams Building on 2nd July. The event, which marks the completion of the school’s building works, started with a tour of the school for the Lord-Lieutenant and other guests, including a drama performance, meeting Duke of Edinburgh and Combined Cadet Force participants. 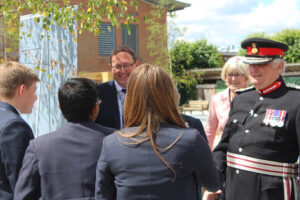 The Lord-Lieutenant then unveiled a plaque marking the occasion and was treated to musical performances by Year 7 and Year 10 students. 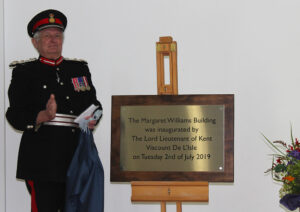 In their speeches at the event the Lord- Lieutenant, Dame Sally Coates representing United Learning, Margaret Williams the Chair of Governors and Luke Magee the Principal, all thanked the parents, students, local community and external people involved with setting up and opening Wye Free School in 2013 for their support and hard work. 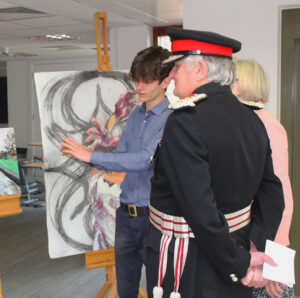 Owen McMahon, Year 12, talking to the Lord-Lieutenant about his artworks that were exhibited at 10 Downing Street. (c) Wye School.

Wye School’s journey to completion finishes  this year in September when the first Year 13 students will round off seven years of growth since opening.