The Sittingbourne Maritime Cadets and Commanding Officer, Lieutenant Caroline Goodwin, hosted a Trafalgar Night Dinner at the Coniston Hotel, Sittingbourne on the 20th October  to celebrate the anniversary of the Battle of Trafalgar and to commemorate the immortal memory of Admiral Lord Nelson.

Representatives of both the Royal and Merchant Navies were in attendance and the Guest of Honour representing the Lord-Lieutenant was Mr Paul Auston DL accompanied by Rear Admiral John Roberts CB, who both made presentations of awards during the evening.

Mr Auston presented awards to  the Unit President, Captain James Kitney, for his support whilst being at Sea, the Unit Vice  President, Mr Ron Lamb for appreciation and gratitude in support of what he has done for the unit, and  Mrs Anne Hill, for supporting the Unit as Kent Poppy Organiser on the evening.

Rear Admiral John Roberts presented certificates to  cadet Mariner Lee Gumbrill, who has achieved the advanced piping badge and to Mr and Mrs Moroni, for donating an 8 man tent. 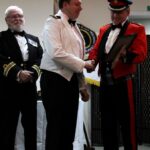 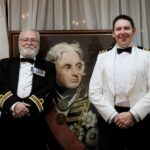 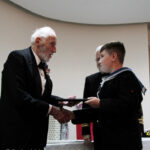