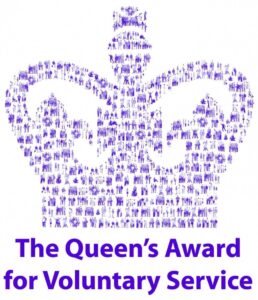 The Lord- Lieutenant and the Deputies have been in the front line of the assessing the Queen’s Awards for Voluntary Service ever since Her Majesty established them to mark her Golden Jubilee. The Lieutenancy seeks to ensure grassroots voluntary achievements across our county are recognised by the highest award of its kind.

Kent is blessed with an army of voluntary organisations, run by dedicated supporters. In the past thirteen years a number of those organisations in Kent have been awarded QAVS, the equivalent of a corporate MBE.

There is no deadline for nominations. They are considered at any time within three years of the nomination. You cannot nominate a group for a particular year’s Award.Visits will be made by a member(s) of the Lieutenancy who will submit a report to the national assessment panel. The Awards are published on 2 June on the anniversary of Her Majesty’s coronation.  For further information click here.

We should be very proud of our volunteers therefore we need to encourage as many as possible to submit an entry.

During her reign, The Queen has instigated two Awards to honour and promote organisations in Industry and Voluntary Service; these prestigious annual awards are competitive. The winners receive a trophy and certificate presented by The Lord- Lieutenant or The Vice Lord Lieutenant. The details are as follows: