The Queen visits RBLI to celebrate their centenary, 6th November 2019

HM The Queen visited Royal British Legion Industries (RBLI) village at Aylesford, on 6th November to celebrate their centenary year, a special anniversary for a charity that’s been offering vital support to former armed forces staff, military veterans and their families for 100 years. The village  provides a home for more than 300 residents as well as offering welfare, training and employment opportunities. 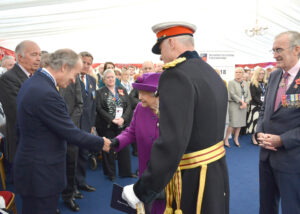 The Queen saw the first phase of a new development of specially adapted apartments for wounded former servicemen and women, and met many of the village’s  residents.

Her Majesty spoke with many war veterans and their families during her visit and also with some of the military veterans and civilians who make road signs at the RBLI’s on-site social enterprise branded Britain’s Bravest Manufacturing Company. 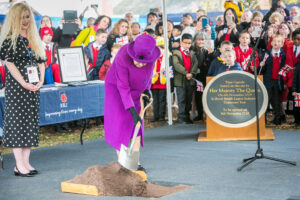 HM The Queen buried a time capsule, which includes a letter from herself among the contents, to be opened in a hundred years time.(c) Rob Berry.

She told the Chief Executive  she was delighted to spend time with veterans and their families – whose lives have been transformed by RBLI village.

The RBLI will now embark on a £22million expansion programme for the veterans of the next 100 years. 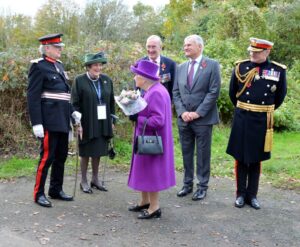