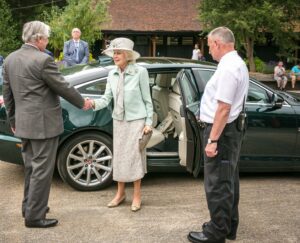 HRH Princess Alexandra started her visit to Kent at Leeds Castle as part of the Castle’s  900th anniversary celebrations. Greeted by the Lord-Lieutenant of Kent, The Viscount De L’Isle, HRH opened the new ‘Princess Alexandra Gardens’. The gardens of Leeds Castle are currently undergoing an exciting seven year project that will develop six diverse new areas including an Oriental Garden and Jungle Garden. 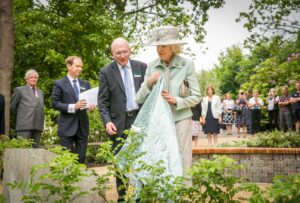 Later in the afternoon, Princess Alexandra was invited to unveil the marking stone for the 900th anniversary time capsule. The time capsule celebrates life at Leeds Castle in 2019 and includes items such as an Ordnance Survey map, tickets and leaflets for Leeds Castle, coins and stamps. Also included in the time capsule were the two winning stories from the Leeds Castle BIG 900 Story Writing Challenge, which was open to children aged 5-13 years. The two winning authors were invited back and had the privilege of meeting Princess Alexandra. 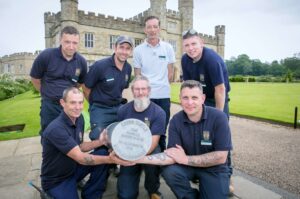 “We were honoured to welcome back Princess Alexandra to Leeds Castle, our Patron for over 45 years, for a very special day to celebrate the Castle’s 900th anniversary,” said Leeds Castle chief executive Sir David Steel. “The Princess continues to be a wonderful patron and we were thrilled that she spent so much time with us, meeting so many of our staff and visitors, naming our woodland gardens in her name, dedicating a time capsule and attending a celebratory dinner.

The Romney Marsh Historic Churches Trust was honoured to host a visit to Romney Marsh by HRH. It had been a personal request of the Princess to take a tour of the churches and, within the timings allowed, four of the fourteen churches of the Marsh were included, as well as an introduction to community interest project, Romney Tweed. 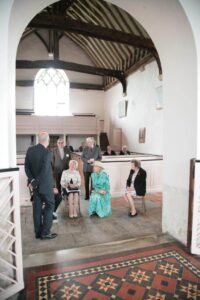 The Princess takes time to hear more on St Clement, Old Romney by her guide for the day, John Hendy.(c) Ian Hamilton.

On arrival at Old Romney, the Princess was received by HM Lord-Lieutenant of Kent, Viscount De L’Isle, who presented the High Sheriff of Kent, Mr Paul Barrett and Chairman of the Trust, Mr Peter Anwyl-Harris.

The Princess’ tour of the churches was started at St Clement, Old Romney where she was received by Priest in Charge the Very Rev. John Richardson. The Trust’s Council Member, John Hendy acted as the guide throughout her visit, spending quiet time with the Princess to share each church’s unique story. From Old Romney, it was on to St Augustine, Brookland, where she was met by the children from the primary school who turned out in force to greet her. She was received by the Rev Shuna Body. 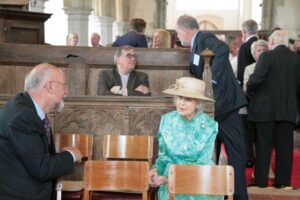 St Thomas Becket, Fairfield, is an essential stopover on any tour of the Marsh churches and the Princess was able to view this iconic little church from the road. The Princess’s tour ended at St George, Ivychurch where a reception was held, and as well as being received by Rev John Richardson and the Archdeacon for Ashford, the Venerable Darren Miller, the Princess met representatives from all fourteen Romney Marsh churches, as well as several members of the Trust’s Council. Lucy Staple, grand-daughter of Council Member George Staple, presented a posy to the Princess at the end of her visit.

With the Princess’ parting comment being that she must return one day to visit the other Marsh churches, Peter Anwyl-Harris reflected on a very successful day “I think she thoroughly enjoyed it. She was very interested in the churches and engaged with so many of those involved in their care, as well as spending time talking to many of the children at Brookland School. She was delightful.”