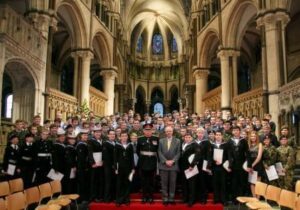 The Lord-Lieutenant attended a ceremony held in the Quire of Canterbury Cathedral on Monday 17th June to present certificates on behalf of the education charity CVQO celebrating the achievements of 91 Kent cadets. The certificates acknowledge the Cadets completion of CVQO-led BTEC Level 1 Certificate in Teamwork, Personal Skills and Citizenship. The group are the […]

The Lord Lieutenant would like to congratulate all those who have received honours in Her Majesty The Queen’s Birthday Honours 2013.  Order of the Bath Companion (CB) Miss Jennifer Rowe (Bromley).  For services to the Administration of Justice and to the Royal British Legion Royal Victorian Order Commander (CVO) The Hon. James Leigh-Pemberton (Sittingbourne). For […]

The Lord-Lieutenant wishes to congratulate this year’s winners from Kent Voluntary Organisations, following the Cabinet Office announcement of the 2013 QAVS Awards nationwide. Cobbes Meadow Group Riding for the Disabled Association Candlers Way Chartham Canterbury Kent CT4 7TU Teaching disabled people of all ages to ride and to improve their physical and mental abilities.   […] 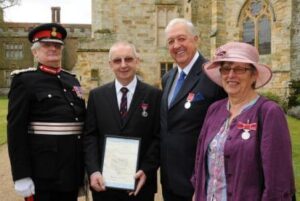 The Lord-Lieutenant held an Investiture at Penshurst Place on the 17th April, 2013, to award  the British Empire Medal (BEM) to Mr Peter  Barrell and Mrs Anne Hawkins who were listed in the New Year Honours. Additionally Mr Bernard Thompson was presented with the Imperial Service Medal (ISM)  following his retirement from the Civil […]