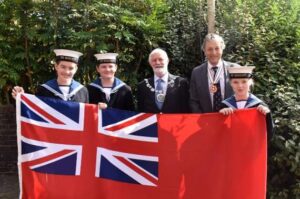 Deputy Lieutenant Lord Colgrain joined the Chairman of Sevenoaks District Council, Councillor John Edwards-Winser, when the Red Ensign was hoisted above the council offices in Sevenoaks in honour of the British Merchant Navy. Also in attendance  were veterans and Westerham Sea Cadets.

The flag raising took place on 30th August 2019, ahead of Merchant Navy Day (3rd September), which honours sailors’ contributions during both World Wars and celebrates Britain’s dependence on merchant seafarers.

Cllr Edwards-Winser said: “It was an honour to commemorate the work of the Merchant Navy. Their work has often been unrecognised, especially during the Second World War, so it was a privilege to lead the flag raising ceremony. They are essential to our prosperity and survival as an island nation.”