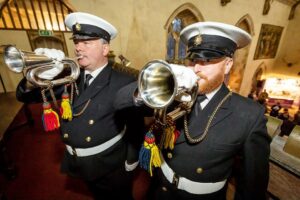 Trumpeters heralding the arrival of the Lord-Lieutenant. (c) Stewart Turkington. 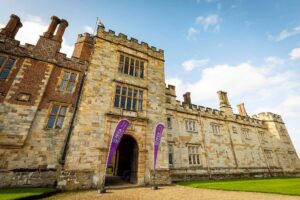 Penshurst Place where the ceremony was held. (c) Stewart Turkington.

Her Majesty’s Lord-Lieutenant’s SERFCA Annual Award Ceremony for the County of Kent took place on 26th September 2019 at the Lord-Lieutenant’s family home, Penshurst Place. The annual Lord-Lieutenant’s Awards are for Reservists, Cadet Force Adult Volunteers, cadets and employees of the Reserve Forces and Cadet Organisations of the Armed Forces and are recognised as laudatory honours throughout the Ministry of Defence. 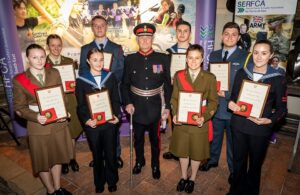 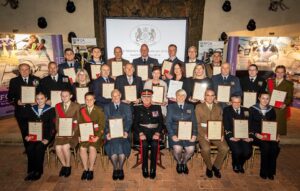 Her Majesty’s Lord Lieutenant, The Viscount De L’Isle CVO MBE, presented 16 Meritorious Service Certificates, one CVQO Certificate of Recognition Award  and 8 Cadet of the Year Awards.  The Shepherd Neame Best Reservist Award was presented by Mr  Robin Duncan, Company Secretary along with a trophy and a cheque for £100. The Lord-Lieutenant’s Certificates for Meritorious Service were instituted in order to afford public recognition to those members of the Reserve and Cadet Forces whose efforts are not recognised by the twice yearly Honours Lists.  The Lord-Lieutenant’s Certificate thus ranks second to The Queen’s Honours Lists. 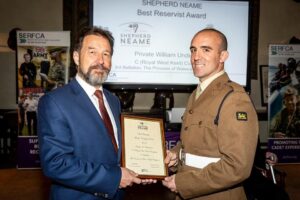 The Cadet of the Year Award marks the achievement of outstanding service by an individual to their Cadet movement.  A certificate is awarded, together with a Lord-Lieutenant’s Badge which the individual is entitled to wear when in uniform.

The best Reservist Award is awarded to the Reservist considered by the selection board to have achieved the most or to have made the greatest contribution to the Reserve Service in the County of Kent.

In his speech the Lord-Lieutenant said:  ‘This evening has been our opportunity to celebrate the achievements of today’s outstanding individuals, serving our Reserve Forces and Cadets.

I am certain you have been impressed, as I have, by the demonstration of the volunteer ethos shown by the worthy recipients tonight.  I would like to thank all Reservists, here, on behalf of Her Majesty and our County for their dedicated service to their community.

None of this voluntary service would be possible without the support of families and friends.  I take this opportunity to thank all the families for the sacrifices they make in support of their family members who are serving with the Reserve forces or with the Cadet force of all three branches of the Services.

I would like to thank all Local Authorities across Kent for joining in the good work. We can all be justly proud that we are at the forefront of supporting our Armed Forces -Regular, Reservists and Cadets – in equal measure.’