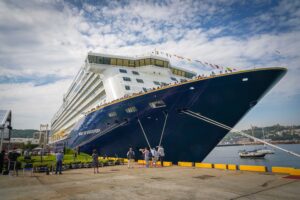 The Spirit of Discovery at Dover Port. ©James Barke

HRH The Duchess of Cornwall visited the port of Dover on 5th July 2019 to name the new Saga cruise ship, the Spirit of Discovery, officially becoming its Godmother.

On arrival HRH was greeted by Kent Deputy Lieutenant Mr Bill Fawcus DL, representing the Lord-Lieutenant of Kent, The Viscount De L’Isle. Other dignitaries welcoming the Duchess included Patrick O’Sullivan, Chairman of Saga, and the company’s Chief Executive, Lance Batchelor. Recently retired Bishop of Dover, the Right Reverend Trevor Willmott, also took part in the blessing of the new vessel which can host 999 guests and 523 crew members. Other guests included those involved in the design and construction of the ship including the Saga cruise team, Sir Roger de Haan DL, son of company founder Sidney de Haan, and some of the firm’s customers from past cruises. The Band of Her Majesty’s Royal Marines Collingwood performed, as did the Morriston Orpheus Choir.

The Duchess of Cornwall and Saga share a common link in their support for The Silver Line, a charity founded by TV presenter Dame Esther Rantzen, who was also present at the celebration. HRH is the patron of the charity and The Silver Line is Saga’s first national charity partner. 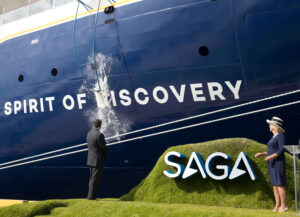 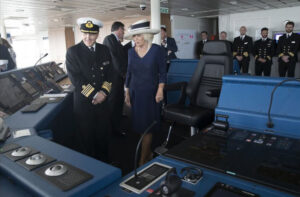 Captain Julian Burgess with The Duchess of Cornwall on the bridge. ©Stephen Lock.

The Duchess had a short tour of the ship with Captain Julian Burgess, accompanied by Saga executives, and unveiled a plaque. She then joined around 500 guests on a quay at the garden party-themed reception where she cut a cake – a two metre replica of the ship – made by award-winning chocolatier and pastry chef Mark Tilling. When naming  the ship the Duchess made a speech to the guests and sent a jeroboam of English sparkling wine smashing against the side of the £364m ship.

Musician Jools Holland DL played on board later in the evening and had been on the ship that afternoon, meeting the Duchess there. He said “The ship is extraordinary, I’ve never seen anything like it in my life. It’s like a floating world, with restaurants and a theatre. I’ve been to Dover a lot of times but I’ve never seen it from 14 storeys up. Looking back at Dover it’s totally amazing with the cliffs and the castle, it’s quite a spectacle. I’ve also never been to the naming of a ship so it’s been great fun.”

Doug Bannister, chief executive of the Port of Dover, said: “This momentous occasion is testament to the outstanding partnership we have built with Saga and represents an exciting future for us as a Port, as we take a step closer to fully unveiling our Western Docks redevelopment.” 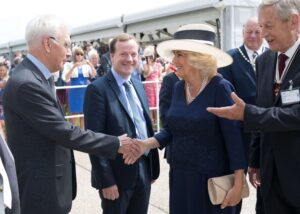 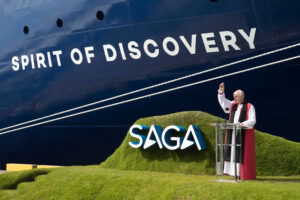 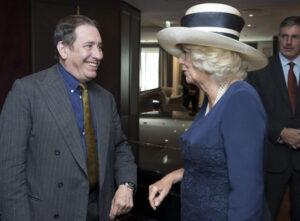 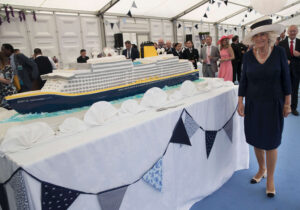 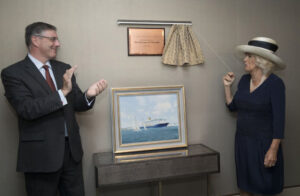