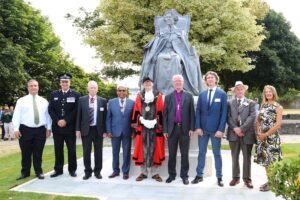 On 26th July at St Andrew’s Gardens in Gravesend, Councillor David Turner, as the Leader of Gravesham Borough Council and Freeman of the Borough, along with Rt Rev James Longstaff, Bishop of Rochester and Bishop of HM Prisons, unveiled a statue of Her Majesty Queen Elizabeth II in commemoration of her being the longest reigning monarch. Dr Bhargawa Vasudaven DL was present as the representative of the Lieutenancy of Kent, and also in attendance were various community and council leaders, senior representatives from the Fire Service, Police, Port of London Authority and various local voluntary organisations.

Given Gravesham’s history and diverse multicultural population, the statue of Her Majesty signifies much to the people of Gravesham, chiefly:

Dr Bhargawa Vasudaven DL said “It was a proud day for all of us in Gravesham to be presented with Her Majesty’s statue in full glory.”