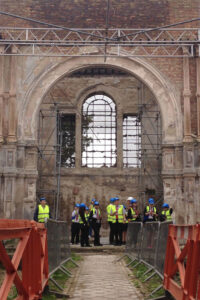 The Duke of Kent arrived on the Isle of Sheppey greeted by the Lord-Lieutenant, and started his visit at the Guildhall Museum at Queenborough to meet the Charter 650 Committee which was formed to celebrate 650 years of the town’s Royal Charter which was given by King Edward lll.

The Duke then toured the fire-damaged Dockyard Church at Blue Town where Will Palin and the Sheerness Dockyard Preservation Trust are masterminding a multi-million make-over to bring the building back to community use. for more information https://sdpt.org.uk/

After lunch, the Duke was driven to Eastchurch to inspect the Aviation Museum which is gearing up to celebrate 100 years of the RAF and was met by manager Peter West and trustees Martin and Rosemary Hawkins. Eastchurch played a pivotal role in the creation of the RAF and is widely hailed as the birthplace of British aviation.