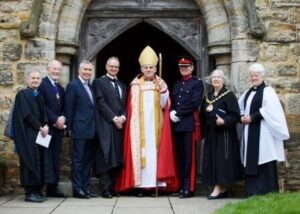 The Vice Lord-Lieutenant of Kent, Mr Richard Oldfield DL, represented the Lord-Lieutenant at Cranbrook School’s fifth centenary celebrations on 22nd March 2018, when a unique Founders’ Day service was held at St. Dunstan’s Church. Held in honour of founder John Blubery and other benefactors, including Queen Elizabeth I, the service was also attended by the Mayor of Tunbridge Wells, Julia Soyke, and led by the Bishop of Dover, Trevor Wilmott, deputy to the Archbishop of Canterbury. The audience, consisting of all current students, staff, Governors and Trustees, in addition to former Headteachers and senior staff, was treated to an abundance of excellent music – choral, orchestral and ensemble – interspersed with readings by leaders of the school and the parish church.

Chairman of Governors James Peace commented afterwards, “We have all been treated to a wonderful display of what makes this school and this community great. Our students have sung superbly and played their musical instruments to perfection. This day is sure to go down as one of the highlights of an historic year for the school. To have involved our new 2017 intake in the telling of a story which goes back to Henry VIII is a remarkable achievement. There are very few schools which are older than Cranbrook and even fewer which still function on the same site, fulfilling their original purpose in the way that we do. This is what makes town and gown in Cranbrook such a special feature. We are all very proud – here’s to the next five hundred years!”