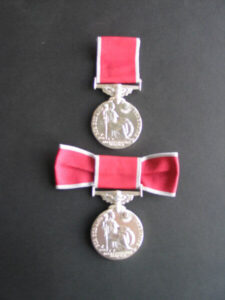 Kent’s finest have been honoured by The Queen with the presentation of their British Empire Medals (BEM).
Chosen for their outstanding and dedicated community work and public service the 9 recipients, Dr Andrew Ashbee (Snodland); Rev’d Carol Avery (formerly of Greenhithe); Mr Andrew Callard (Otford); Mrs Mary Chapman (Chatham); Mr David Hogben (Herne Bay); Mrs Molly Poulter (Maidstone); Mr Keith Rawlings (Hythe); Mrs Carol Reed (Canterbury); and Mrs May Smith (Dartford) were named in The Queen’s 2019 Birthday Honours list.
The Lord-Lieutenant, Viscount De L’Isle CVO MBE, held an Investiture at Penshurst Place on 8th October to present the 9 Medallists with their award, following the official announcement in June.
The Ceremony took place in the Sunderland Room where guests of the recipients were able to witness the Ceremony. The short citations were read by Mrs Louise Bryant a Deputy Lieutenant and one of the Lord-Lieutenant’s Cadets, CQMS Tabitha Gardiner from Tunbridge Wells Girls’ Grammar School CCF also assisted the Lord-Lieutenant during the Ceremony. 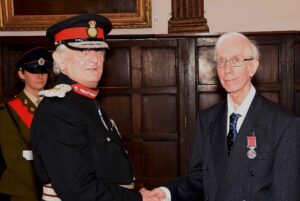 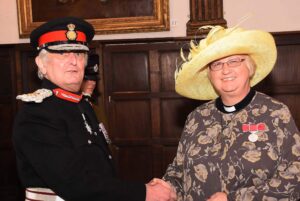 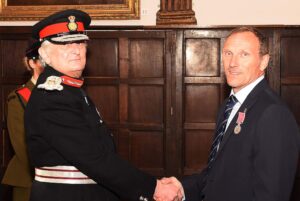 Dr Andrew Ashbee has served the community of Snodland for over 60 years. He is the Chairman of the Snodland Historical Society and was instrumental in setting up the Snodland Museum back in 1999. He spends a great deal of his time supporting and raising funds for All Saints Church, to help preserve this 14th Century building. He was also the Director of the Choral Society for over 30 years.

Mr Andrew Callard is a former International Weightlifting Champion for Great Britain, having competed at Commonwealth and Olympic level. He formed the Europa Weightlifting Club in 2002 which he runs voluntarily. He is also a volunteer coach for two London Boroughs. In 2010, he was chosen to be the Team England Weightlifting Coach at the Delhi Commonwealth Games at which he produced England’s first ever female weightlifting medallist. 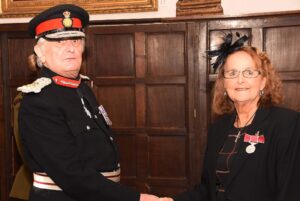 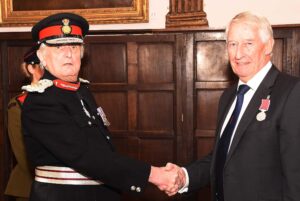 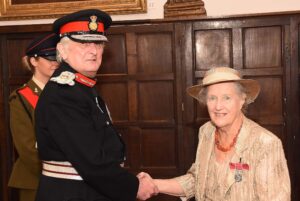 Mrs Mary Chapman has been a Pottery Tutor for Medway Adult Education Service for over 40 years, with many of her students going on to become professional potters or teachers. She has also created and leads innovative classes for students with physical and learning disabilities.

Mr David Hogben has dedicated much of his life to promoting the benefits of sailing to schools and groups. He has helped to improve the Herne Bay Sailing Club to make it accessible to all, including new disabled facilities.

Mrs Molly Poulter has served her community for over 50 years, including helping to raise £1.3m over 7 years for the Heart of Kent Hospice, which was officially opened in 1992 by Diana, Princess of Wales. She continues to fund raise for countless organisations in the community. 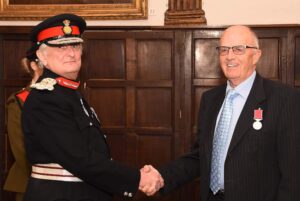 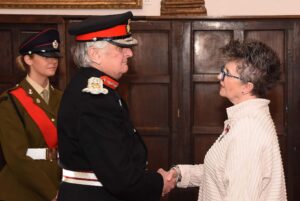 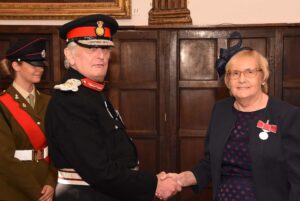 Mr Keith Rawlings formed his own charitable trust in 1990 and has helped many national and international causes, including more locally the Pilgrims Hospice, Demelza House as well as military charities. With his business background, he also helps others in setting up their own business.

Mrs Carol Reed has dedicated over 30 years to raising funds for women and children worldwide. During her time as Chairman of the Canterbury Save The Children, she helped raised over £250,000 to fund projects both at home and abroad to support child welfare. She is also fundraising for an international project known as the Meru Women’s Garden Project in Kenya.

Mrs May Smith has devoted over 30 years in fundraising and volunteering at the NSPCC. In 1988, she started the Wilmington District Branch of the NSPCC and continues to spend her time organising fundraising events that will help support and promote the NSPCC. 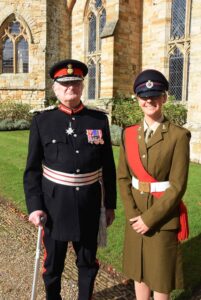 Anyone wishing to nominate an individual for an award of the BEM should go to https://www.gov.uk/honours and download an application form. Further guidance on how to nominate a suitable candidate can be found on this website.